Please note: All meetings are via Zoom until further notice.

All unit dues must be paid by February 4, 2022. If you have not paid your dues by this date or made payment arrangements, we will begin to pull games.

The NFHS has been informed by the NCAA that the BBCOR decertification process has been implemented for the following baseball bats. Effective immediately and until further notice, the bats listed below should be considered a non-compliant bat and subject to NFHS Baseball Rules 4-1-3b and 7-4-1a.

To see the memo from CIF, which includes pictures of the bats, please click here. 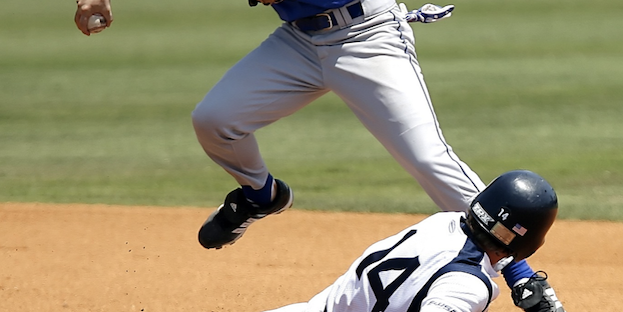 The NFHS has received calls about the compliancy of baseballs with the NOCSAE/SEI performance standard mark that do not match the image that is depicted in the NFHS Baseball Rules book or other NFHS publications (see below). If the baseball has the words NOCSAE®/SEI printed on the ball, then the balls are compliant with NFHS playing rules (see images & red arrows below) for possible examples of approved markings on baseballs. Thanks and enjoy the start of baseball season!

Another area in which we need more consistency is the hybrid position. “Hybrid” is not a word that you will find in the rule book, but the definition of a hybrid something that is made by combining two things together. A “hybrid” position is a combination of the windup and the set positions.

Rule 6-1-1 states, “The pitcher shall pitch while facing the batter from either a windup position or a set position. the position of his feet determine whether he will pitch from the windup or the set position.” Further, it states that the pivot foot must be in contact with the pitcher’s plate.

Rule 6-1-2 defines the wind-up position stating, “The pitcher’s *non-pivot foot* shall be in any position *on or behind* a line extending through the front edge of the pitcher’s plate.” In other words, the heel of the non-pivot foot can be as far forward as touching the front edge of the rubber. It can also be so far back that the toes are entirely behind the rubber. Remember that this year’s editorial change made it so that the entire pivot foot no longer needs to be in contact with the rubber. As long as part of the pivot foot is touching the plate, the pitcher has met the conditions for the pivot foot.

To help us all understand what is legal and what is not, please review the pictures below. (Note that some images use the word “free” rather than “non-pivot”.) 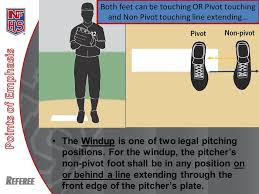 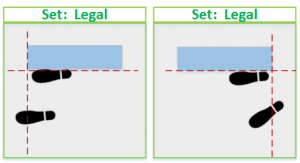 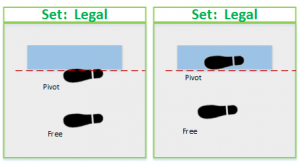 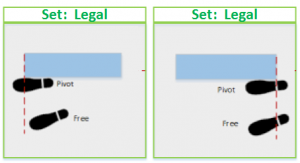 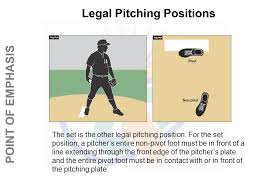 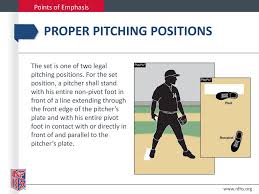 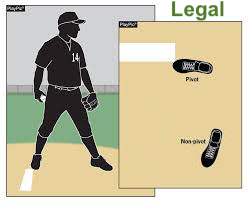 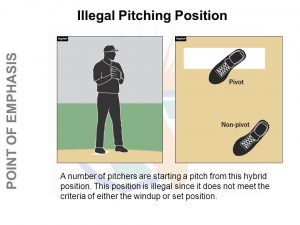 Remember, we do not want to be overly technical, nor do we want to give any team an advantage or disadvantage. Use preventive umpiring as much as possible. Try and fix it as the pitcher is warming up, or have the catcher or 1st baseman call time and talk to the pitcher before anyone starts to complain.
March 11, 2019March 12, 2019 Winkley

We are always striving to be consistent–not only in our own personal games but as a unit as a whole. One area where it seems that there is a lot of inconsistency is the Hit by Pitch rule. It seems like a pendulum, where some umpires are placing an unnecessary burden on the batter to get out of the way and others put them on anytime they get hit. As with most things, the middle ground is the best way to go.

In football, we look for certain “indicators” to call certain fouls. We can apply that to HBP as well. If a batter has opportunity to get out of the way but sticks out his arm or leg, that is an indicator that he permitted the ball to hit him; he should not be awarded first base (unless it was also ball four). If a slow pitch is inside and the batter makes no move, that is an indicator; he should probably be kept at home.

This is a safety rule. When I keep a player at the plate because he permitted the pitch to touch him and a coach complains that it is a safety rule, I respond by saying, “That’s right, coach. It’s not safe for your batter to let the pitch hit him.” That being said, when in doubt, error on the side of safety and send the batter to first.